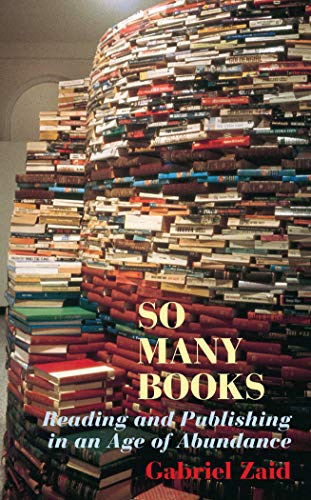 SO MANY BOOKS: Reading and Publishing in an Age of Abundance

"The human race publishes a book every thirty seconds," writes Mexican author and consultant Zaid. How can the average reader keep up with even a fraction of the latest new releases, let alone the multitude of classics stretching all the way back to Homer and Plato? The prospect is daunting to even the greatest bibliophile; furthermore, Zaid argues, people seem more interested in writing books than reading them (a recent survey shows 81% of Americans feel they should write a book). Though frustrated by this state of affairs, Zaid takes a philosophical perspective on the state of book publishing today, claiming that the industry doesn't always recognize one of its greatest strengths: its overwhelming diversity. In the publishing industry, a book that appeals to just a few thousand readers stands a good chance of getting published, whereas the commercial film industry and other mass media must function almost exclusively on a mega-budget scale. He celebrates the small printings that appeal to segmented clienteles, specialized niches, and members of different clubs of enthusiasts because "just a few thousand copies, read by the right people, are enough to change the course of conversation, the boundaries of literature, and our intellectual life." Not a groundbreaking book, but an appealing, meditative collection of thoughts and observations on the book industry and the state of literature in the early 21st century.