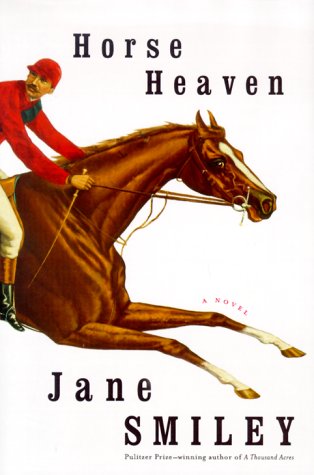 The Chinese calendar aside, 2000 may be the Year of the Horse. Almost neck and neck with Alyson Hagy's Keeneland, this novel about horses and their breeders, owners, trainers, grooms, jockeys, traders, bettors and other turf-obsessed humans is another winner. Smiley, it turns out, knows a prodigious amount about Thoroughbreds, and she is as good at describing the stages of their lives, their temperaments and personalities as she is in chronicling the ambitions, financial windfalls and ruins, love affairs, partings and reconciliations of her large cast of human characters. With settings that range from California and Kentucky to Paris, the novel covers two years in which the players vie with each other to produce a mount that can win high-stakes races. Readers will discover that hundreds of things can go wrong with a horse, from breeding through birth, training and racing, and that every race has variables and hazards that can produce danger and death, as well as the loss of millions of dollars. (A scene in which one horse stumbles and sets off a chain reaction of carnage is heartbreaking.) Characters who plan, scheme, connive and yearn for a winner include several greedy, impetuous millionaires and their wives; one trainer who is a model of rectitude, and another who has found Jesus but is crooked to the core; two preadolescent, horse-obsessed kids; a knockout black woman whose beauty is the entrance key to the racing world; the horses themselves (cleverly, Smiley depicts a horse communicator who can see into the equine mind); and one very sassy Jack Russell dog. Written with high spirits and enthusiasm, distinguished by Smiley's wry humor (as in Moo), the novel gallops into the home stretch without losing momentum. Fans of A Thousand Acres may feel that Smiley has deserted the realm of serious literature for suspense and romance, but this highly readable novel shows that she can perform in both genres with lan. 150,000 first printing; 15-city author tour; Random House audio. (Apr.)
close
Details