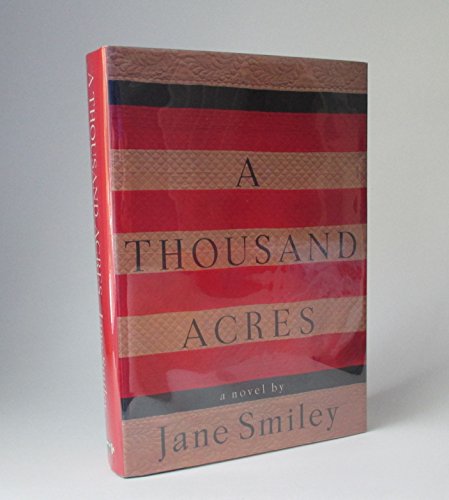 If Smiley ( Ordinary Love & Good Will ) has previously been hailed for her insight into human nature, the moral complexity of her themes and her lucid and resonant prose, her new novel is her best yet, bringing together her extraordinary talents in a story of stunning insight and impact. ``Our farm and our lives seemed secure and good,'' says narrator Ginny Cook, looking back on the summer before her father capriciously decided to turn over his prosperous 1000-acre Iowa farm to his three daughters and their mates. That was the same summer that Jess Clark, their neighbors' prodigal son, returned after a 13-year absence, romance and peril trailing in his wake. Although Ginny's existence as a farmer's wife and caretaker of her irascible, bullying, widower father is not easy, there are compensations in her good marriage, in the close companionship of her indomitable sister Rose, who lives across the road, and in sharing vicariously in the accomplishments of their younger sister, Caroline, a lawyer. Having managed to submerge her grief at being childless, passive Ginny has also hidden a number of darker secrets in her past. These shocking events work their way out of her subconscious in the dreadful aftermath of her father's decision to rescind his legacy, shouting accusations of filial betrayal. Like Lear's daughters, the Cook sisters each reveal their true natures in events that will leave readers gasping with astonishment. Smiley powerfully evokes the unrelenting, insular world of farm life, the symbiotic relationships between a farmer and his land as well as those among the other members of the rural community. She contrasts the stringencies of nature with those of human nature: the sting of sibling rivalry, the tensions of marriage, the psychological burdens of children, the passion of lovers. Her tightly controlled prose propels tension to nearly unbearable extremes--but always within the limits of credibility. In the end, she has raised profound questions about human conduct and moral responsibility, especially about family relationships and the guilt and bitterness they can foster. BOMC selection. (Nov.)
close
Details