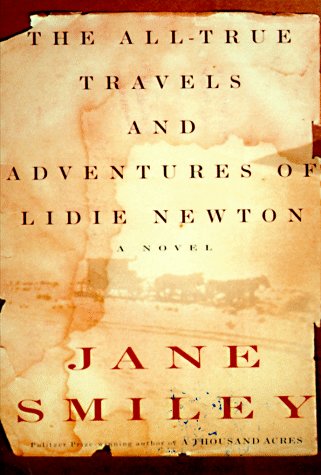 The All-True Travels and Adventures of Lidie Newton

An immensely appealing heroine, a historical setting conveyed with impressive fidelity and a charming and poignant love story make Smiley's (A Thousand Acres) new novel a sure candidate for bestseller longevity. Lidie Harkness, a spinster at 20, is an anomaly in 1850s Illinois. She has an independent mind, a sharp tongue and a backbone; she prefers to swim, shoot, ride and fish rather than spend a minute over the stove or with a darning needle. That makes her the perfect bride for Bostonian abolitionist Thomas Newton, who courts and marries her in a few days while enroute to Lawrence, K.T. (Kansas Territory), with a box of Sharps rifles. As the newlyweds gingerly come to know each other, they are plunged into the turmoil between pro-slavery Border Ruffians from Missouri and K.T. Free Staters, an increasingly savage conflict that presages the Civil War. Smiley evokes antebellum life with a depth of detail that easily equals Russell Banks's exploration of the same terrain in Cloudsplitter (Forecasts, Dec. 1, 1997). Her scenes of quotidian domesticity on the prairie are as engrossing as her evocation of riverboat travel on the Mississippi. Through an exquisite delineation of physical and social differences, she distinguishes and animates settings as diverse as Lawrence, Kansas City, St. Louis and New Orleans. As Lidie and Thomas experience privation, danger and the growing pleasures of emotional intimacy, and as tragedy strikes and Lidie pursues a perilous revenge, Smiley explores the complex moral issues of the time, paying acute attention to inbred attitudes on both sides of the slavery question. Propelled by Lidie's spirited voice, this narrative is packed with drama, irony, historical incident, moral ambiguities and the perception of human frailty. Much of its suspenseful momentum derives from Smiley's adherence to plausible reality: this is not a novel in which things necessarily turn out right for the heroine, for women in general, for blacks or for the righteous. Lidie's character deepens as she gains insight into the ambiguous and complex forces that propel men and women into love and compassion, hatred and violence. In the end, this novel performs all the functions of superior fiction: in reading one woman's moving story, we understand an historical epoch, the social and political conditions that produced it and the psychological, moral and economic motivations of the people who incited and endured its violent confrontations. 200,000 first printing; Random House audio. (Apr.)
close
Details