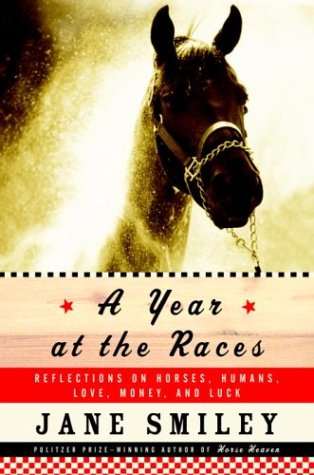 A YEAR AT THE RACES: Reflections on Horses, Humans, Love, Money, and Luck

In a wide-ranging and detailed, yet somewhat flat memoir, Smiley ( ; ; etc.) examines the nuances of horses' lives and of the people who build their lives around them. She does not aim "to evoke horseness, but to evoke horse individuality; to do what a novelist naturally does, which is to limn idiosyncrasy and character, and thereby to shade in some things about identity." This she accomplishes through illustrative episodes with some of the horses she has owned, focusing on two and their fortunes at the track. While the book offers anecdotes and an array of Smiley's theories about horse personality and cognizance, it lacks the narrative or dramatic flair that one expects would come naturally from such an accomplished novelist. The writing can often be formulaic: "In June, Eddie died, and Alexis became my trainer. Hornblower was two. I was fifty. Alexis was forty-eight. Mr. T. had died the year before, at twenty. Jackie was three. Persey was four. Alexis and I began to become friends." Smiley talks of moving her horse from one track to another as "being asked to leave Harvard and take a course at Boston University," and she delights in cutting a grand figure when arriving at the more posh tracks in a publisher-provided Mercedes limousine. In the end, the book provides a meticulous look at the world of thoroughbred horses, but it has too many flaws to be a perfectly enjoyable read.