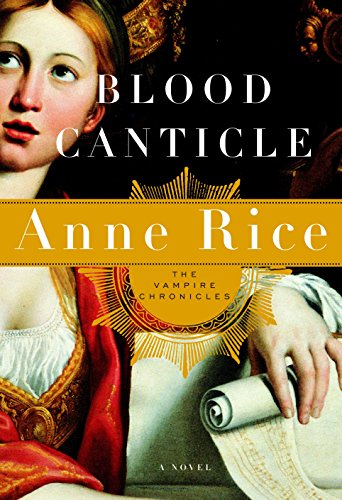 For her 25th fan-pleasing outing, Rice reunites some of her most popular creations and, for the first time since (1995), lets the Vampire Lestat "write" the book. Taking up where last year's ended, the now-doppelg™nger-free Quinn Blackwood and Lestat save Quinn's true love, the witch Mona Mayfair, from certain death by making her an immortal. In his effort to attain sainthood, Lestat must deal with a lot of metaphysical angst. The opulent Blackwood estate and its spooky swamps, as well as New Orleans and a Caribbean isle, provide the settings for many elegant costume changes as the exquisite vampiric triumvirate gleefully suck several deserving victims dry and lay waste to dozens of a drug lord's minions. The vampirisation of young Mona, a true child of our times, gives Rice a dynamic new vampire personality with whom to play. Writing as if her blood-inked quill were afire, Rice seems truly possessed by her Brat Prince of darkness as she races through the story. She sometimes slights members of the vast supporting cast, both dead and alive, but neatly ties up all their loose ends. The complete unification of the Mayfair witch saga with that of the Vampire Chronicles provides either a befitting end or a new beginning for the Queen of the Vampires.