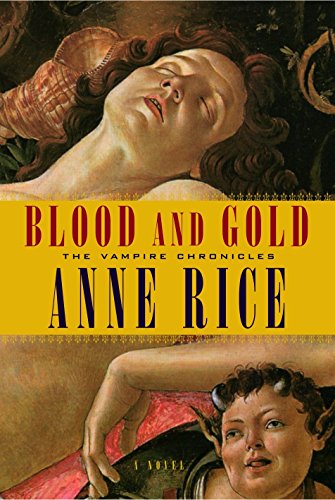 BLOOD AND GOLD: Or, The Story of Marius

Maker of Lestat, lover of Pandora and drifter through time, Marius, one of Rice's most fascinating vampires, shares his side of the story in this latest intriguing yet rushed installment of the popular Vampire Chronicles. The intellectual and artistic "Child of the Millennia" meets ice-age Thorne, another vampire, who's just waking up after a very long sleep and is eager to hear his history. Marius grants Thorne's wish, taking him and the reader on a rollicking vampire adventure through time. Marius was born in Imperial Rome, made a vampire by Druids and has visited ancient Egypt, where he became the protector of the Divine Parents (Akasha, later the Queen of the Damned), and watched the fall of ancient Rome. The best segment covers Marius's stay in Venice and Florence, as well as his "making" of Amadeo (later the Vampire Armand) and his unrequited school-boy infatuation with the artist Sandro Botticelli. He describes his erotic "Perfect Time," when he was in love with the teen Amadeo and with Bianca, who eventually shared the Blood Kiss with Marius after he was almost destroyed by Santino, a Satan-worshipping vampire. How the centuries devoted to the protection of Those Who Must Be Kept are finally brought to an end is told in a story framed by Thorne's lesser developed viewpoint. This device only satisfies partially, as the book speeds to a jarring and gory finale, suggesting that these Vampire Chronicles might well be as endless as world-weary Marius's sojourns through time.