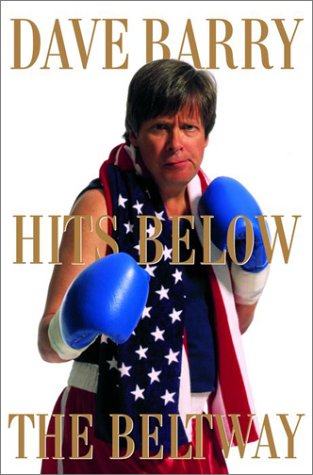 DAVE BARRY HITS BELOW THE BELTWAY: A Vicious and Unprovoked Attack on Our Most Cherished Political Institutions

Sporting red trunks, white and blue boxing gloves and an American flag towel on the cover, pugilistic Pulitzer-winner Barry (, etc.) appears ready for all contenders in this satirical, hard-hitting political commentary ("Whatever the needs of the public are, the government responds to those needs by getting larger"). Beginning with a study of "Early Human Governments" when homo sapiens "were short, hairy, tree-dwelling creatures that strongly resembled Danny DeVito," the sardonic columnist breezes through the centuries to the U.S.'s birth and then to the present, amending the Constitution en route: "If a citizen is arrested, and that citizen hides his or her face from the news media, then as far as the Constitution is concerned, that citizen is guilty." He tours D.C. sites like the Mall, the Smithsonian (which "will pay you top dollar for your Beanie Babies, Cabbage Patch dolls, Pokémon cards, refrigerator magnets, ceramic cats") and the White House ("To take a tour, simply climb over the fence and hold very still until men come sprinting to assist you"). He aims jaundiced japery at presidential "language problems" and elections ("One of these years we're going to elect a president whose first official act will be to launch nuclear strikes against Iowa and New Hampshire"). Once again, the winner is... Dave Barry. 22 illus. and charts not seen by .