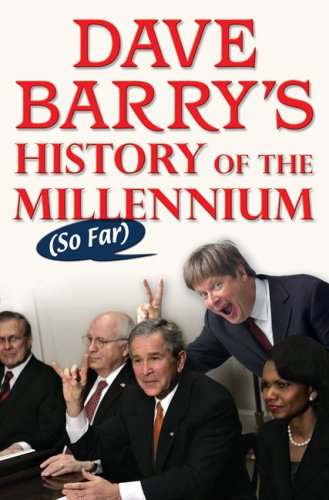 Dave Barry's History of the Millennium (so far)

Although Barry retired his column in 2004, he continues to examine current events with his annual “Year in Review” surveys, and the ones he wrote between 2000 and 2006 are collected here. He opens with a 33-page outline of history (from 1000 to 1999) in which we learn that the first book Gutenberg mass produced in 1455 was by Danielle Steel, and that computer pioneer Charles Babbage “died in 1871, still waiting to talk to someone from Technical Support.” In 2002, airline industry losses prompted “America West, in a cost-cutting measure, to eliminate the cockpit minibar”; 2003: Jayson Blair, leaving the “thoroughly disgraced, is forced to accept a six-figure book contract”; 2004: Abu Ghraib photos revealed “soldiers repeatedly forcing prisoners to look at the video of Janet Jackson's right nipple”; 2006: Osama bin Laden released “another audiotape, for the first time making it downloadable from iTunes.” As a time line of humor, some of Barry's jokes were probably funnier the year they were written, but it's still a breezy and entertaining read. The 32 clever cartoon illustrations brighten the book's pages.