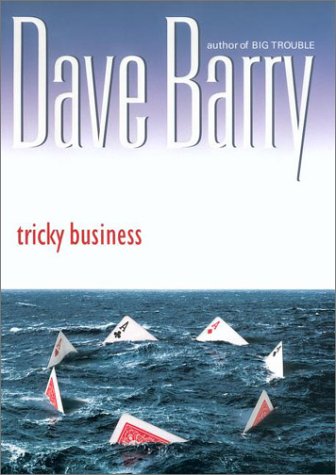 Humorist Barry () brings together a motley group of South Florida eccentrics on an ill-fated casino boat voyage in his second full-length comic mystery novel. A tropical storm is bearing down on the Florida coast, but the , a luxury gambling ship, sets sail on its nightly excursion in spite of the weather. Aboard are Fay Benton, an attractive cocktail waitress trying to make ends meet for her kid; a collection of pot-smoking would-be rockers (at least one of whom lives with his mother) who make up the ship's band, Johnny and the Contusions; a pair of wise-cracking octogenarians who've escaped an extended-care facility; and some Mafia-connected gangsters who use the ship's nightly voyages to smuggle drugs onto the mainland. Bobby Kemp, the ship's titular owner, insists that the go out in the storm because he's chosen this night to hijack the drug deal. In the background, a local television station plays a role straight from as its reporters frantically cover the approaching storm with consistently fatal results. Barry once again showcases his gently satiric style, with barbs aimed at overbearing mothers, corrupt officials, inept authorities and, of course, the American crime novel itself, which he sends up with absurd plotting, astronomical body count and plenty of gratuitous nudity and (PG-rated) sex. Belying self-deprecating disclaimers about his talent for fiction, Barry demonstrates that he can draw some captivating characters and keep a reader's attention in spite of—or perhaps because of—slapstick antics and a fascination with scatology.