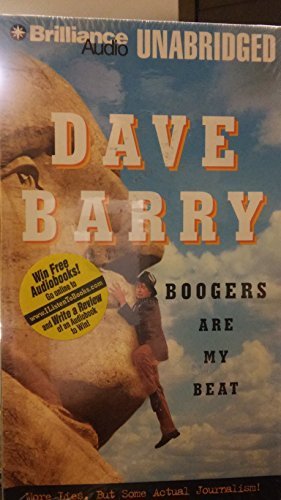 BOOGERS ARE MY BEAT: More Lies but Some Actual Journalism

Oftentimes, the best way to experience a work of humor is to hear it delivered by the author himself, but regrettably, Barry does not lend his voice to this production. Instead, Hill reads this collection of columns—covering everything from the 2000 presidential election to the trials of fatherhood and ice fishing—in a halting manner, his cadence as uneven as a dirt road in North Dakota (a state which Barry good-naturedly makes fun of and which retaliated by naming a sewage pumping facility after him). Although Hill's voice is pleasant enough, his tendency to overemphasize unimportant words and de-emphasize others to the point where they're almost inaudible detracts rather than adds to the humor in these pieces. Indeed, the best segment of this audio book is the last and least humorous, when Hill adopts a straight face and a smoother rhythm to read Barry's moving essays on life after 9/11 and what it means to be a hero. Listeners will be left wishing Hill had employed this reading style throughout instead of trying to add drama and humor to these already amusing pieces.