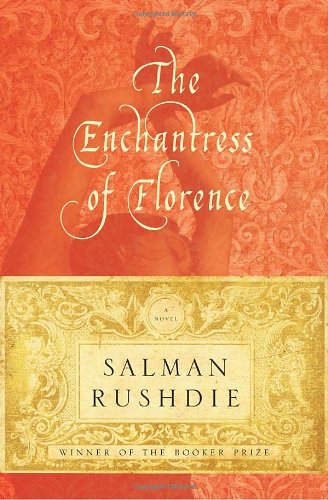 The Enchantress of Florence

Renaissance Florence’s artistic zenith and Mughal India’s cultural summit—reached the following century, at Emperor Akbar’s court in Sikri—are the twin beacons of Rushdie’s ingenious latest, a dense but sparkling return to form. The connecting link between the two cities and epochs is the magically beautiful “hidden princess,” Qara Köz, so gorgeous that her uncovered face makes battle-hardened warriors drop to their knees. Her story underlies the book’s circuitous journey.

A mysterious yellow-haired man in a multicolored coat steps off a rented bullock cart and walks into 16th-century Sikri: he speaks excellent Persian, has a stock of conjurer’s tricks and claims to be Akbar’s uncle. He carries with him a letter from Queen Elizabeth I, which he translates for Akbar with vast incorrectness. But it is the story of Akbar’s great-aunt, Qara Köz, that the man (her putative son) has come to the court to tell. The tale dates to the time of Akbar’s grandfather, Babar (Qara Köz’s brother), and it involves her relationship with the Persian Shah. In the Shah’s employ is Janissary general Nino Argalia, an Italian convert to Islam, whose own story takes the narrative to Renaissance Florence.

Rushdie eventually presents an extended portrait of Florence through the eyes of Niccolò Machiavelli and Ago Vespucci, cousin of the more famous Amerigo. Rushdie’s portrayal of Florence pales in comparison with his depiction of Mughal court society, but it brings Rushdie to his real fascination here: the multitudinous, capillary connections between East and West, a secret history of interchanges that’s disguised by standard histories in which West “discovers” East.

Along the novel’s roundabout way, Qara Köz does seem more alive as a sexual obsession in the tales swapped by various men than as her own person. Genial Akbar, however, emerges as the most fascinating character in the book. Chuang Tzu tells of a man who dreams of being a butterfly and, on waking up, wonders whether he is now a butterfly dreaming he is a man. In Rushdie’s version of the West and East, the two cultures take on a similar blended polarity in Akbar as he listens to the tales. Each culture becomes the dream of the other.