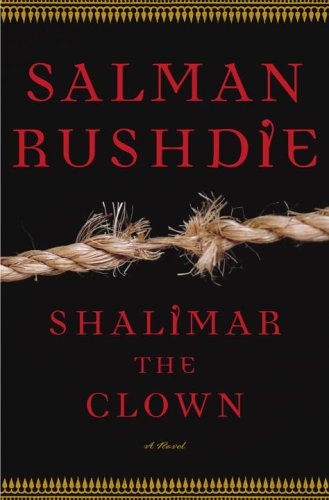 The focus of this novel is extremism. It tells the tale of two Kashmiri villages whose inhabitants gradually get caught up in communal violence. As we know from Yugoslavia, hatred takes on especially horrific manifestations when neighbors turn against each other. The neighbors to whom Rushdie introduces us are memorable and emblematic characters, especially his protagonists, the Hindu dancer Boonyi Kaul and her childhood sweetheart, Shalimar the clown, son of a Muslim family. Their passion becomes a marriage solemnized by both Hindu and Muslim rites, but as conflict heats up, Boonyi seduces the American ambassador. The resulting transformation of Shalimar into a terrorist is easily the most impressive achievement of the book, and here one must congratulate Rushdie for having made artistic capital out of his own suffering, for the years he spent under police protection, hunted by zealots, have been poured into the novel in ways which ring hideously true. Bit by bit, Shalimar becomes a figure of supernatural menace.

The life of the ambassador, Max Ophuls, is also brilliantly invented. In a series of highly effective set pieces—Nazi-occupied Strasbourg, where he failed to persuade his principled parents to save the books they published, not to mention themselves, from the flames (the family was Jewish); southern France, where his exploits on behalf of the Resistance were so colorful that I would spoil the reader's pleasure if I betrayed them; England, where a glamorous wartime romance led him into his only marriage—the author builds our sympathy for the man who (with her connivance) ruins Boonyi's life and sets in motion Shalimar's destiny.

Now for the novel's defects: Rushdie's female characters are generally less plausible than the male ones. When he is describing Kashmir's good old days of communal tolerance, he too frequently takes refuge in slapstick. His depiction of Los Angeles relies so much on references to popular culture that the place becomes a superficial parody of itself. In terms of technique, Rushdie's most irritating tic is the sermonistic parallelism or repetition, but the novel's best passages (not to mention his other great work, ) prove him capable of great style.

Never mind these flaws. is a powerful parable about the willing and unwilling subversion of multiculturalism. And for those readers who even in this post-September-eleventh continue to cling to American narcissism, the parable grows more urgently pointed: Ophuls and Boonyi conceive a daughter, who is taken away at birth and in due time becomes a beautiful, troubled, privileged ignoramus in Los Angeles. About Shalimar the clown, her mother's husband, she doesn't have a clue. Is that her fault? Is it our fault that we never paid much attention to the rest of the world? But one day, without any warning, two planes smashed into the Twin Towers, and now (wake up and run!) Shalimar the clown has arrived in Los Angeles. (