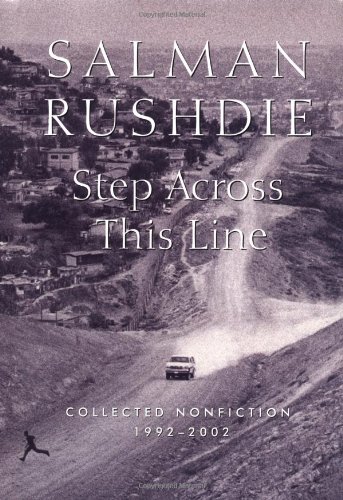 Roughly one-fourth of these essays deals with the response of the media, various governments and Rushdie himself to what he calls the "unfunny Valentine" he received on February 14, 1989, from the Ayatollah Khomeini: the fatwa calling for his death. Everyone, it seems, had a script for Rushdie to follow, though none of these fantasies resembled the rather simple one the author fancied (and which seems to have been realized), which is that his problems gradually disappear and he be allowed to resume a more or less normal writerly life. To paraphrase an idea that appears in several of these essays, the problem is that frontiers cross us rather than the other way around: we are going about our business when our country is divided (as happened to Rushdie's native India in 1947) or we encounter a shocking work of art or our enemies declare they will kill us. Many respond to unnerving changes by embracing religion, but, says Rushdie, "ancient wisdoms are modern nonsenses"; in place of sectarian fervor, he recommends intellectual freedom, a simple concept yet a rigorous practice, as this book proves. These essays range over literature, politics and religion, as well as Rushdie's two private passions, rock music and soccer. They are united by a play of sparkling intelligence seasoned with sly wit, qualities that would serve the world at any time in its long, flawed history. After all, says Rushdie, the story he loved first and still loves best, perhaps the story of all humanity, is The Wizard of Oz, a fable that tells us the grown-up world doesn't really work, that adults can be good people and still be bad wizards. (Sept.)