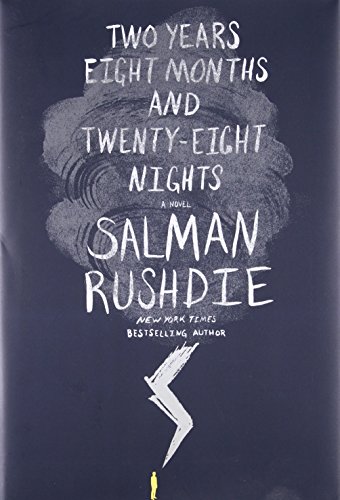 In his latest novel, Rushdie (Joseph Anton) invents his own cultural narrative%E2%80%94one that blends elements of One Thousand and One Nights, Homeric epics, and sci-fi and action/adventure comic books. The title is a reference to the magical stretch of time that unites the book's three periods, which are actually millennia apart. In the first period (the 12th century), jinn princess Dunia falls in love with real-life philosopher and advocate of reason and science Averroes (aka Ibn Rushd) and bears multiple children. In the second period (current day), Dunia's descendants, a group including a gardener and a young graphic novelist, are unaware of their powerful lineage (despite the fact that they inherited Dunia's trademark earlobelessness). Then they witness a great storm devastating New York; worse, a slit between the jinn world and the human world opens and the dark jinn slip through. The gardener suddenly finds himself levitating, the artist hosting jinn in his room. Dunia returns to defend the human race by confronting her four fiercest enemies, one by one: Zumurrud, Zabardast, Shining Ruby, and Ra'im Blood-Drinker. Rushdie even incorporates a third period, a far-future millennium, further tying his story together across time. His magical realism celebrates the power of metaphor, while both historic accounts and fables are imbued with familiar themes of migration and separation, reason and faith, repression and freedom. Referencing Henry James, Mel Brooks, Mickey Mouse, Gracian, Bravo TV, and Aristotle, among others, Rushdie provides readers with an intellectual treasure chest cleverly disguised as a comic pop-culture apocalyptic caprice. (Sept.)
close
Details