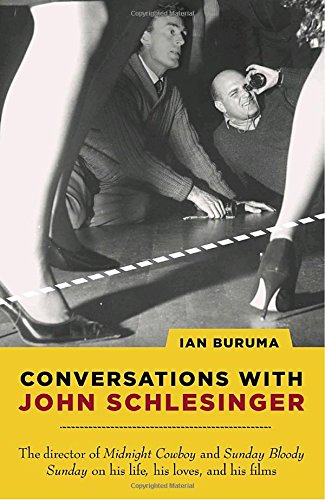 How does an accomplished historian of Asia ( ) come to write about an Oscar-winning director? Buruma, it turns out, is Schlesinger's nephew—as a small child, he even had a brief cameo in one of his uncle's earliest short productions. Their personal rapport creates a leisurely pace, so it isn't until a third of the way through that the conversation turns to Schlesinger's first major directing effort, 1962's . The veteran director has amusing behind-the-scenes anecdotes about actors like Jon Voight and Laurence Olivier, but a debilitating stroke (Schlesinger died in 2003) ended the talks before he could discuss his final films, including the Madonna vehicle (not, Buruma suggests, that he would have had anything good to say about the experience). Schlesinger feels his limitations keenly—"I've never been a critics' darling," he admits—but offers perceptive insights into the reception of his frank treatment of controversial subjects. In fact, he believed, his most famous film, (1969), couldn't get made in today's Hollywood, its treatment of homosexuality and male hustling too raw for skittish studios. A fuller consideration of Schlesinger's work is still needed, but these informal dialogues will do until then. Photos.