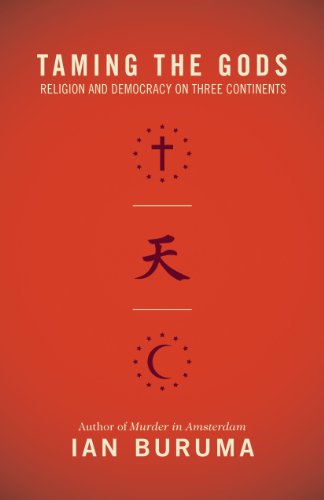 Taming the Gods: Religion and Democracy on Three Continents

The place of organized religion in the public square is well-trammeled territory; in this brief volume, journalist and Bard College professor Buruma ( ) adds to the discussion with political and cultural analyses from the United States, Europe, and Asia. By examining the history of church/state relations in the U.S. and Europe, the role of religion in the politics of China and Japan, and the growing role of Islam in contemporary Europe, Buruma makes “an attempt to sort out, in different cultures, how democracies have been affected... by these tensions [between religious and secular authorities].” One of his most provocative investigations involves secular, liberal Europeans, some of whom now find common ground with conservatives in their opposition to Islam out of fear that it will roll back the progressive gains of the past decades. Buruma takes issue with theocrats and “strict secularists” alike, using the example of Martin Luther King Jr. to argue instead that “expressions of religious beliefs in politics are legitimate as long as those beliefs inform positions that are subject to reason.” Some readers may have difficulty following the thread of Buruma’s thesis through the dense weave of historical data.