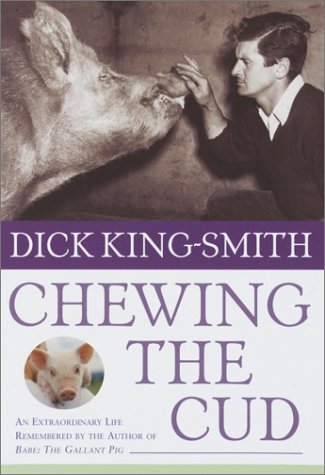 "I wasn't a particularly good soldier or farmer or salesman or factory worker or teacher, but at last I've found something I can do reasonably well," concludes this warm and witty memoir by the author of and more than 100 other children's books. But how he arrived at his career as author makes for delectable fodder in this humorous and conversational volume, peppered with accomplished pen-and-inks by Horse (). King-Smith recounts an eventful life that spanned the greater part of the 20th century and is still going strong into the 21st. He traces his meandering career path—recalling many comic moments during his years spent farming with his wife, Myrle (he confesses somewhat sheepishly, "For Myrle and me, life at Woodlands Farm was really an extension of our childhood pet keeping"). The pages brim with eccentric characters worthy of a P.G. Wodehouse novel (e.g., "Mr. Hamper was distinguishable from his larger pigs by virtue of wearing clothes and standing on his hind legs"). Children will particularly enjoy hearing of the many animals he has known, from the chameleons he collected on a WWII troop ship en route to Tripoli, to the hamsters he inadvertently bred (they escaped) at a manor-house-cum-agricultural-college, to the scores of cows, pigs, poultry, dogs and more that he raised. For kids from one to 92, these pages reveal a gifted writer with an affection for animals and a simple country life, a passion for his work, and sheer goodness of heart. Ages 10-up.