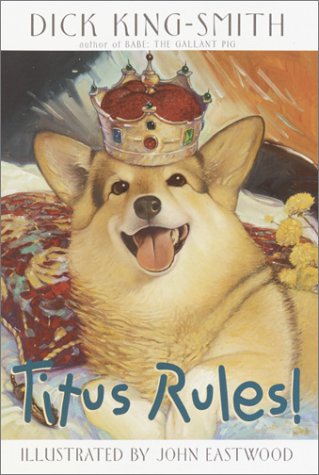 King-Smith () affectionately pokes fun at Britain's Royal Family in this agreeable romp. One of a herd of Pembrokeshire corgis in constant attendance on Queen Elizabeth II, Titus is just a puppy when the tale opens. He quickly makes "quite a name" for himself, however, first by not piddling on the castle carpet (" a good boy!" says the Queen) and, later, by nabbing a light-fingered footman, sounding the alarm when a fire breaks out and otherwise displaying his cleverness. Although "Madge," as her Consort calls her (short for Majesty), is quick to protest that she doesn't believe in favoritism, it's soon clear who rules the roost. "I may be a queen among my people but you're a king among my dogs," the Queen eventually confides, and a documentary on vandalism inspires her to pull a prank with a can of spray paint to prove her point. King-Smith's sense of humor is as waggish as ever (a chair is described as "warm from the imprint of the royal bottom"), and adults will appreciate the mild quips made at the Royals' expense, particularly with imagined conversations between "Madge" and a curmudgeonly Prince Philip ("Never trust a chap with small ears," he says of the thieving footman), plus a cameo appearance by Prince Charles in which "Mummy" pulls rank. A nimble blend of animal hijinks and gentle satire (enhanced by Eastwood's pen-and-inks that deftly caricature the cast), this one is jolly good fun. Ages 7-10.