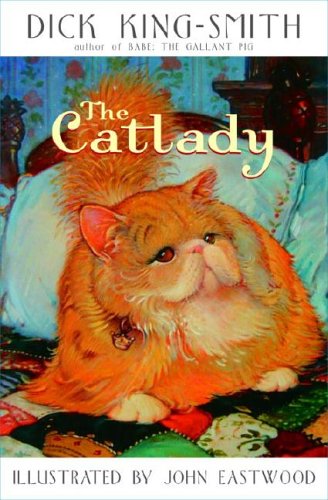 In King-Smith's ( ) warm-hearted tale set in 1901, an eccentric elderly woman shares her late parents' home with 20 cats. The felines dine with her at the table and curl up on her bed, where, "with her rather sharp features, green eyes, and gray hair tied back to show her somewhat pointed ears," the sleeping woman herself "looked much like a giant cat." Muriel Ponsonby's rapport with her brood takes on a diverting dimension: she believes in reincarnation, and some of these furry companions are deceased friends, family members (including her parents) and even Queen Victoria—come back as felines. Born on the same day this monarch died, Vicky adds humor to the narrative, waddling "regally" and speaking haughtily in the royal we ("We do not have enough attention paid to us. We are, after all, the most important cat in the house—in the land, indeed"). Mary, an orphan, moves in and helps look after the menagerie, and later inherits Muriel's home and pets when the woman passes away. Shrewd readers will anticipate that the event is less sad than it might be, in a house where spirits are reborn; indeed, six months later, "a gray cat... with a sharp face and green eyes and rather pointed ears" marches into the house and leaps onto Muriel's bed. Eastwood contributes appealing pen-and-inks to this pleasantly quirky story, bound to make kids gaze more intently into the eyes of their feline friends. Ages 7-10.