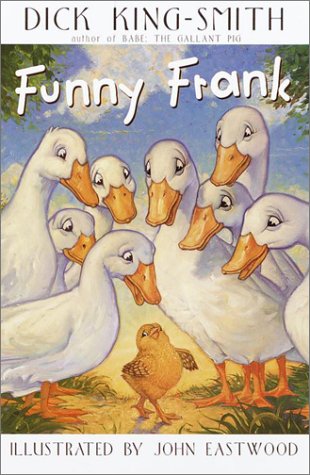 This cheery twist on the ugly duckling story finds a barnyard chick named Frank longing to be a duck. From the moment he's hatched, Frank spends all his time at the edge of the pond. "Chickens can't swim," his worried mother tells him, but he tries anyway—with near-disastrous results. Frank is rescued by the farmer's daughter who, with the help of her veterinarian uncle and dressmaker mother, devises a little wet suit for him out of an old hot-water bottle and makes flippers from rubber gloves. Frank quickly becomes not only a speed demon on the pond, out-swimming his web-footed pals, but also a hero when he saves his mother from a fox. Nevertheless full happiness eludes him ("He was after all a chicken at heart"), and when a speckled pullet named Gorgeous catches his eye, he finally learns to embrace life on land. Thoroughly engaging, this story trips along in typically breezy King-Smith () fashion, deftly flipping perspectives between that of the anthropomorphized barnyard animals and the human characters. Chipper dialogue, generous helpings of humor and a lickety-split plot add up to an amusing chapter book. Final artwork not seen by . Ages 7-10.