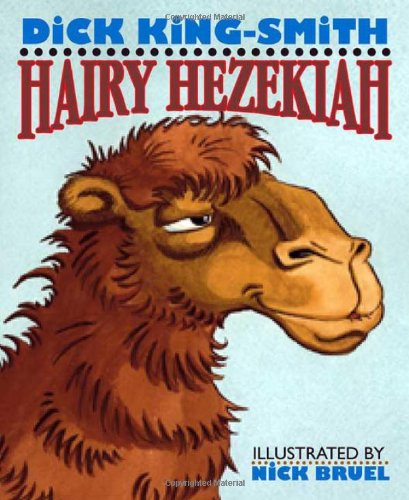 Polished raconteur King-Smith ( ) adds another cheerful animal caper to his repertoire, introducing a hairy Bactrian camel who is the sole member of his species in an English zoo. Hoping to find a pal, the lonely creature escapes from his paddock and roams around the zoo. But friends are nowhere to be found: the lions threaten to eat him, the chimps laugh at him and a parrot insults his appearance. Hezekiah then lumbers through the countryside, where he “wreaked a trail of havoc,” leaving behind broken gates, smashed fences and holes in hedges, thus enabling other animals to leave their pastures and amble where they like. When the camel expresses a desire “to find somewhere safe to go, somewhere with lots of space,” some Holstein cows point him in the direction of a safari park, located on the grounds of an earl's estate. That debonair fellow (who sports a bushy beard and mustache) is immediately enchanted by his visitor: “They looked into each other's eyes, and perhaps because each was so hairy, both felt that they were kindred spirits and had become—and would always continue to be—best friends.” King-Smith expertly juggles the comedic and the informational—readers may be surprised by how much they will learn about the species—and Bruel's ( ) cartoon art enhances both the initial poignancy and the playfulness of this tale. Ages 7-10.