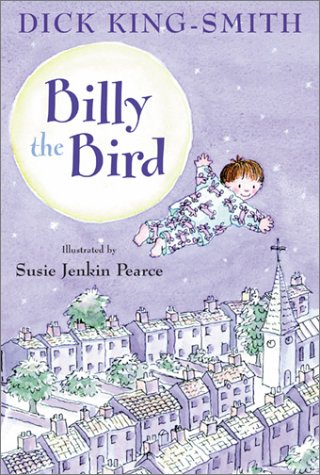 This slender tale features King-Smith's (; ) signature talking animals and gentle humor, but falls shy of his usual standards. Mary Bird is eight the summer she discovers that her little brother can fly. On Friday, June 20, "I looked up, and there I saw Billy—his nose, his tummy, and his toes touching the ceiling. He wasn't walking in his sleep, he was floating in it!" With the help of her guinea pig and cat (both of which can talk), Mary deduces that Billy can defy gravity only during a full moon. One August night, Billy—who has no recollection of his feats the morning after—actually makes it out his window, swooping through the night sky. So begins a series of mild adventures—including a cat burglar who gets his comeuppance when an "alien" (Billy) attacks him—until a lunar eclipse grounds Billy for good. King-Smith makes some slapstick jokes about the situation ("Goodness, how time flies," remarks their mother concerning the late hour, "And that's not the only thing that's been flying," says Mary to herself), and younger readers ready to test their wings on a short novel should find the story engaging. But the novel jumps from one of Billy's flights to the next, without much character development or description of daily life. Fans of King-Smith's more substantial fare may wish this one were a bit more meaty. Final artwork not seen by . Ages 7-10.