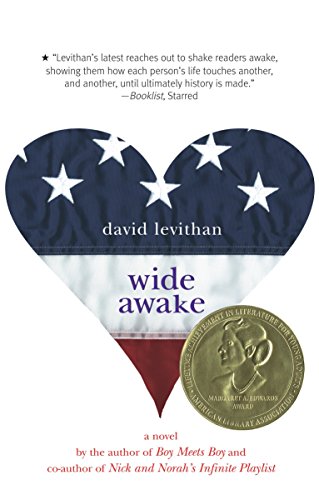 Levithan ( ) again creates a refreshingly offbeat world to impart an uplifting message. In this novel, set slightly in the future, a gay Jewish man is elected president of the United States, much to the joy of gay teen Duncan, who worked on his campaign. But when the governor of Kansas—the decisive state—begins a recount and starts "disqualifying as many Stein votes as possible," narrator Duncan, his boyfriend and their campaign friends head to a giant rally in Topeka to stick it out until the race is decided. Along the way, Duncan meets new friends, struggles with his relationship, and figures out what it means to stand up and be "a part of history." The author includes some whimsical details, some of which work well (Duncan and his friends go to a "non-shopping mall" where, after "the prices were scanned in, you made a donation to a worthy cause instead of buying the stuff"), others of which are clever but rather distracting (the hero meets a boy named Sue who learns that his name fits because "there were parts of me that liked being a girl"). Not everyone will agree with Duncan's perspective, but most readers will find plenty to think about in terms of where our society is headed—and what role each individual can play in directing its future. Ages 14-up.