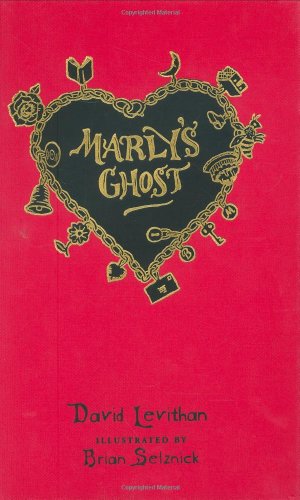 In Levithan's ( ) clever but rather thin retelling of , he casts sad teenaged Ben as Scrooge. Because of his girlfriend's death from cancer, he has a "bah humbug" attitude about love as Valentine's Day approaches. His girlfriend, Marly, appears to him as a ghost, telling him he will be visited by the Ghost of Love Past, Present and Future. After their visit, Ben realizes that "giving up on love is the same thing as giving up on life itself." There are some fun adaptations in this modern version; Tiny Tim, for example, is not a boy who may die, but rather a young gay couple (Tiny and Tim) at risk of breaking up. But the book, attractively packaged as an unjacketed, red cloth-covered hardcover featuring a black-and-gold embossed heart bordered with chains, takes a bit too long to unfold. While readers will sympathize with Ben who says he "wanted to die" without Marly, they will likely be ready for some action long before Marly's ghost arrives. The witty writing is also a bit too self-conscious at times (at a present-day anti–Valentine's Day party, "only the sadder love songs would be broadcast tonight: The Cure with no sense of a cure, breakup breakdowns and long-player longings"). Selznick's cross-hatch pen-and-inks give a nod to Victorian drawings and boost the novel's haunting aura. In the end, this novel has charm, but is likely more memorable for its premise than for its story line. Ages 12-up.