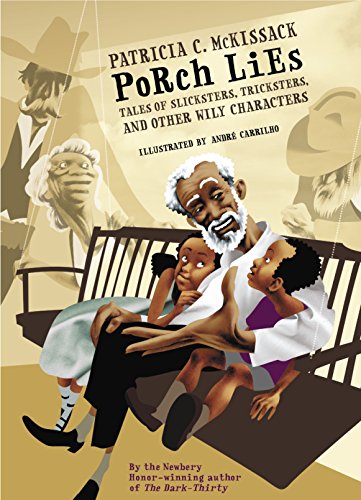 Porch Lies: Tales of Slicksters, Tricksters, and Other Wily Characters

As McKissack ( ) opens this treasure chest of tales, she recalls spending summer evenings on her grandparents' front porch in Nashville, where her grandfather and visitors would share spellbinding "porch lies," comically exaggerated stories that often centered on rogues and rascals. The author then presents her own variations on such yarns, "expand[ing] the myths, legends, and historical figures who often appear in the African American oral tradition" to create a sparkling array of porch lies, brimming with beguiling tricksters. McKissack sets the domestic scene for each by describing the porch visitor who first related the tale. A standout features wise, sassy Aunt Gran, who outsmarts Frank and Jesse James, manipulating the bandits into running out of town the racist villain who salted her well in hopes of procuring her property. Other memorable characters include the conniving used-car salesman who is brought to judgment quite humorously on the eve of his wedding; the truth-twisting fellow who wins the liars' contest at the state fair with the line, "I aine never told a lie before"; and a famous blues harmonica player, who wreaks such havoc in the holding station en route to heaven—or the alternative—that he's sent back to earth. Aunt Gran, slyly telling the James brothers a tale that will convince them to help her, notes, "Some folk believe the story; some don't. You decide for yourself." Readers of these spry tall tales will have a grand time doing just that. Ages 8-12.