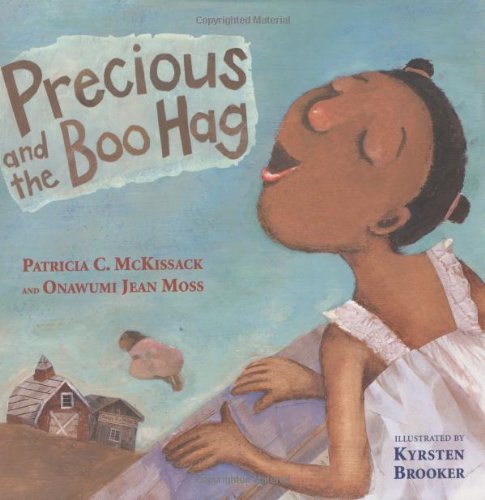 PRECIOUS AND THE BOO HAG

Newbery Honor author McKissack ( ) teams up with storyteller Moss to relay—with flair and humor—the tale of a girl with a stomachache who stays at home while her mother and brother go off to the fields to plant corn. Mama leaves Precious with a warning ("Don't let nothing and nobody in this house") and Brother slyly adds that if Precious let someone in the house, it may well turn out to be Pruella the Boo Hag ("She's tricky and she's scary, and she tries to make you disobey yo' mama"). Though the girl tries to reassure herself that there's no such thing as the Boo Hag, suddenly the honeysuckle wilts on the vine and "the sunny day took on a dark and dreary disposition." The creature, with "eyes of burning cinder and hair that shot out like lightning," appears "riding on the back of a storm," demanding that Precious let her inside with a voice "that rumbled like rolling thunder." Precious bravely sings a chant announcing her refusal to let the hag in and the creature disappears—only to return three more times in various guises, including that of a shiny penny. Brooker ( ) conveys the rowdy, larger-than-life goings-on in playfully exaggerated, stylized collage art which features a range of textures. The story's lively language, pleasing cadence and effective repetition of Precious's chant make this a buoyant read-aloud. Ages 4-8.