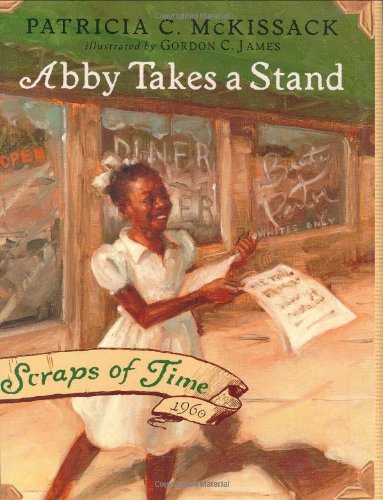 McKissack kicks off the engaging Scraps of Time series with this chapter book, which opens as cousins explore their grandmother Gee's attic, filled with "scraps of time." One such scrap, a menu from The Monkey Bar in Nashville, sparks Gee's memory of a pivotal episode in her childhood—and in the American civil rights movement. Gee recalls the year 1960 when, as 10-year-old Abby, she is stunned to be turned away from the new restaurant, just because she is black. McKissack gives a clear sense of the racial tenor of the time: though blacks could now sit wherever they liked on busses, segregated schools and "whites only" signs are still the reality. While her cousin organizes lunch-counter sit-ins, Abby passes out flyers advocating nonviolent protests; and after her cousin is arrested, the resolute girl takes her own stand, boldly drinking from a whites-only water fountain. McKissack has a keen sense of her audience: when, in the story's rewarding climax, Abby and her mother eat at the newly integrated Monkey Bar, Abby observes (after sampling the not-so-great food), "I don't think the sit-ins were about the food. I think they were about having choices." The author uses humor and universal experiences of childhood (Abby and her best friend love milkshakes and scary movies) to draw readers into the larger backdrop of history in the making. Back in the present, the cousins' discovery of another memento—Gee's great-grandfather's Civil War medal—sets the scene for the next tale. Ages 8-up.