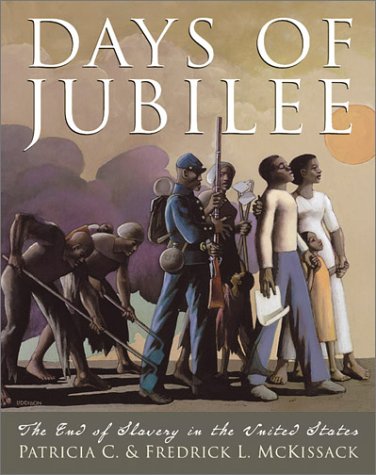 DAYS OF JUBILEE: The End of Slavery in the United States

"There wasn't one day when all the slaves were freed at the same time," write the McKissacks () in this compelling chronicle of slavery's demise in America. "Whenever slaves learned they were free, that day became Jubilee." The authors begin with the tenuous compromises made after the Revolutionary War and underscore historical events by weaving extensive quotes from slave narratives and the stories of contemporary persons. They include not only the famous, such as President Lincoln and abolitionist Frederick Douglass, but also citizens such as James Forten, an African-American businessman who "was shocked and dismayed when the United States Constitution was ratified without abolishing slavery" and who worked actively as an abolitionist throughout his life. Sideline perspectives like that of Southern slaveholder Mary Chestnut, whose diary documents her views on the Civil War, offer additional texture. Tinted sidebars provide expanded profiles, including that of Philip Coleman, an enslaved coachman who "prided himself on being a gentleman's gentleman" until he witnesses the death of white men at the hands of Union soldiers, and realizes that "his master is not invincible as once he'd thought" and runs away. The McKissacks ably balance the nation's gradual progress with heartrending examples of prejudice even after the Civil War that illustrate how far the nation still needed to go to achieve true equality. The inclusion of individual voices and life stories lends this well-researched overview of emancipation a sense of immediacy and relevance for today's readers. Ages 8-12.