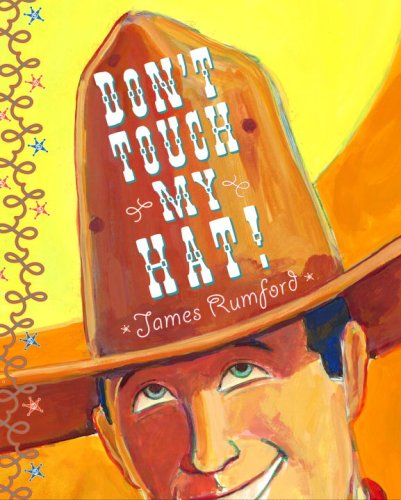 Convinced he owes his prowess and acts of bravery to his cowboy hat, Sheriff John has an attachment to the ten-gallon talisman that borders on obsession. Page after page of watercolor illustrations show the sheriff in various settings—at the barber shop, in the bathtub—all the while consumed with his hat's whereabouts. Rumford tempers this seriousness with a text steeped in Western twang ("Takin' his Saturday bath:/ 'Sugar,/ don't touch/ my hat!'/ Afore he turned out the light:/ 'Now, Darlin',/ don't touch/ my hat!' "). But on a night the likes of which gave the "Ol' West" its "wild" reputation, the Sheriff unknowingly grabs his wife's utterly feminine hat and learns a lesson: "It's your heart, not your hat" that counts. Rumford's depictions of the Wild West setting and attire are stronger than his portraits (filled with profiles and squinty-eyed faces), but this romp of a read suggests that a hero need not don a superhero's cape; he need only be himself. Ages 4-8.