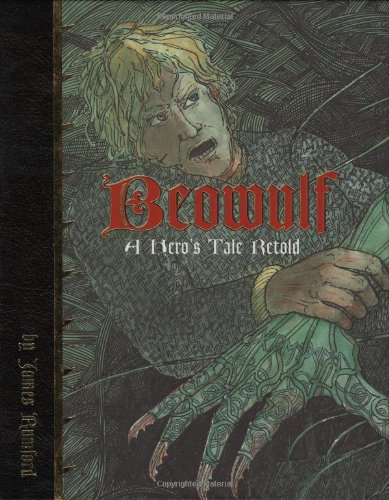 What you have heard before is nothing.” So begins this strikingly illustrated adaptation of Restricting his vocabulary almost exclusively to words with Anglo-Saxon origins, Rumford ( ) fashions a type of epic language: “It was then that Wiglaf showed his true heart-strength. Shieldless, with seared hands, he stuck his gleaming sword into the dragon. This freed Beowulf, who drew a knife from his belt and buried it deep inside the fire-snake.” Rumford's own “heart-strength” comes through in his art, pen-and-ink and watercolor illustrations that convey the ninth-century action with 21st-century immediacy. Large panels offer detailed views of pivotal scenes, and Rumford's expert use of line generates an almost visible degree of motion; when Grendel's mother menaces Beowulf, he seems virtually to fall as she advances with her ominously curved knife. Behind the art and text panels in the first two sections lurks the dragon that is to prove so crucial in the end; in the concluding section, increasing numbers of crows foreshadow Beowulf's death. A very skillful presentation. Ages 9-12.