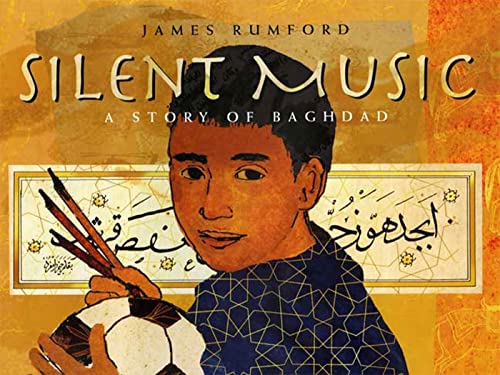 Silent Music: A Story of Baghdad

Art sings on the pages of this visual celebration of Arabic calligraphy as Rumford’s ( ) collages of floral and geometric designs and flowing lines deftly echo Arabic language and patterns. “Writing a long sentence is like watching a soccer player in slow motion as he kicks the ball across the field, as I leave a trail of dots and loops behind me,” says narrator Ali, explaining his love of calligraphy. Spreads incorporating stamps, money and postcards reinforce the Baghdad setting and complement representational scenes, such as an intricate collage of Ali huddling under a blanket next to his cat, writing. Arabic words, translated in places, sometimes embed in the pages as part of the illustrations, even patterning Ali’s mother’s dress. Like his hero, the famed calligrapher Yakut, who wrote through the destruction of Baghdad in 1258 (“he shut out the horror and wrote glistening letters of rhythm and grace”), Ali turns to calligraphy during the bombing of Baghdad in 2003. In an eloquent ending, he discovers that while the word “war” flows easily, the pen “stubbornly resists me when I make the difficult waves and slanted staff of —peace.” Ages 4-8.