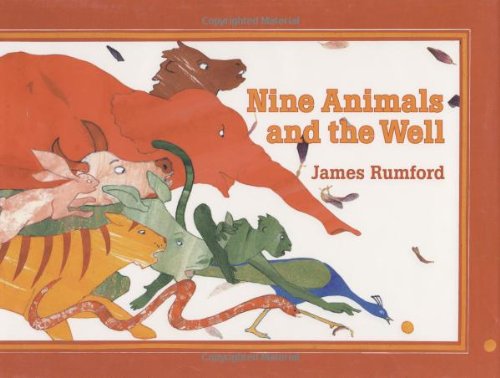 NINE ANIMALS AND THE WELL

Even with its finely crafted collage illustrations and intriguing facts about the origin of so-called Arabic numerals, Rumford's () counting book adds up to less than the sum of its parts. Invited to a birthday party for the young raja-king, each of nine animals in turn discards his gift in favor of joining in another animal's more desirable present. Thus Monkey throws away his one loaf of bread and shares Rhino's gift of two mangoes, which is soon obscured by Camel's three cakes, etc.; readers young enough to enjoy the predictable plot are likely to be put off by the drawn-out storytelling. The sophisticated collages, on the other hand, will have broad appeal. Rumsford renders the animals in translucent papers, which he embellishes with brush, pen and pencil. Stripes and mottled shading add texture, and the palette of complementary greens and reds supplies both harmony and contrast. Handmade flower-petal paper backs the collage compositions, intensifying the visual interest. Margins house the numeral featured in each spread, pictured in its European, North African, Arabic and initial Indian forms. The evolution of the numerals, however, is not integral to the story, and the introduction and endnote, which explain this history, feel tacked on. Ages 5-10.