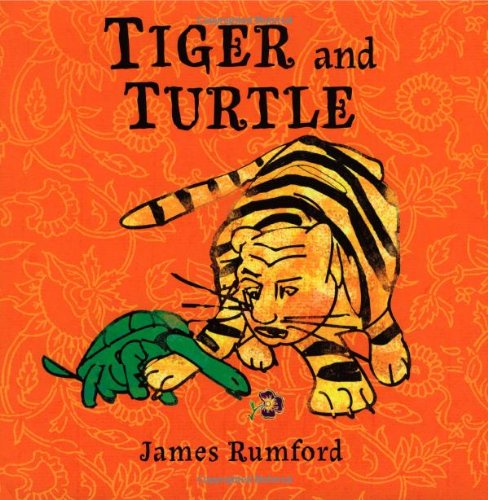 Rumford ( ) presents a tightly crafted fable about a contest of wills. The mismatched creatures of the title, Tiger and Turtle, don't have much to do with each other, “until the tiniest of flowers floated down out of the sky, borne aloft, we think, by a spring breeze.” In a study of the way arguments escalate—whether between tigers and turtles, small children, or nations—the animals' weaknesses prolong the ensuing conflict and harden their resolve to win. Their inadvertent discovery that there are thousands of other flowers like the one they have been fighting over makes a suitable moral lesson. The animals are boldly stroked and simply colored; the intricacy lies in the background, composed of screenlike traceries of paisley textile designs from India and Pakistan with the grain of handmade paper visible underneath. Rumford's pyrotechnical imagination soars in the book's brief introduction, as he envisions an Afghan scribe telling him the tale, “twining a ribbon of Persian words across the page, whisper-singing the story.” It's a tantalizing preview of a tale whose simplicity belies physical comedy and emotional truth. Ages 4–8.