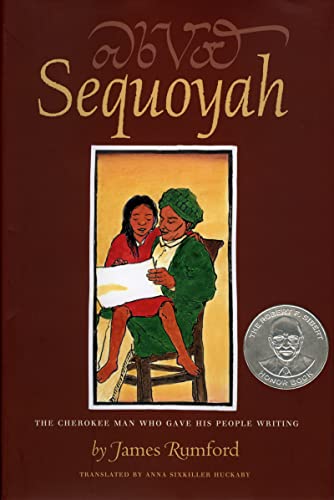 SEQUOYAH: The Cherokee Man Who Gave His People Writing

James Rumford, Author , with a Cherokee trans. by Anna Sixkille

Rumford's ( ) economical yet lyrically told picture-book biography begins as the unseen narrator's father explains how California's Giant Sequoia, or redwoods, earned their name. "This Sequoyah must have been famous,/ .../ He must have been as tall and as strong as these trees." The narrative then recounts the story of a man, crippled, who was born in Tennessee in the 1760s to "a Cherokee woman and a white man he never knew."

Sequoyah "was not a chief, but he loved his people like one./ He wanted them to stand as tall as any people on earth." Sequoyah knew no English and could not read, but invented a writing system for the Cherokee, believing that "Writing will make us strong." The determined man scratched onto slats of wood hundreds of symbols—one for each word. When detractors, fearing these signs were evil, burned down his cabin and his work, Sequoyah began again using a different tactic; he invented a syllabary of 84 signs, "to spell out the sounds of the language." Sixkiller Huckaby's Cherokee translation, presented alongside the English text, makes the story all the more real and relevant. Reminiscent of woodblock prints, Rumford's spare mixed-media compositions in shades of deep green and red clay, create a pleasingly subtle, rough-hewn texture. The art's vertical format effectively imitates the stature of both the mighty redwoods and their namesake who, despite his physical ailments, stands tall and strong. Ages 5-9.