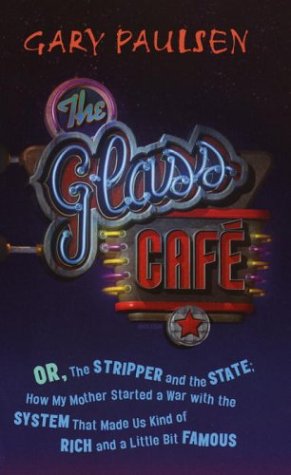 THE GLASS CAF: Or the Stripper and the State; How My Mother Started a War with the System that Made Us Kind of Rich and a Little Bit Famous

In one of his minor efforts, the prolific Paulsen serves up a righteous, pro–free-speech theme accompanied by big helpings of over-the-top plot lines. Twelve-year-old Tony, in whose disingenuously naïve voice the story is told, lives with his single mom, Al, a stripper with a heart of gold who hopes to finance a Ph.D. in literature. In art class at school, Tony discovers a talent for drawing, and almost overnight he produces an extraordinarily nuanced set of life drawings, using his mother's barely clothed co-workers as models. When his enraptured art teacher enters his work in a show, someone reports Al to the state as an unfit mother (for encouraging her son "to draw pornographic pictures"). Enter a policeman and a thick-headed social worker, and before readers can say SWAT team, the action escalates to a conflagration worthy of national news coverage. Besides the exaggerated events, Paulsen looks to the endless run-on sentences and artless grammar of Tony's delivery for humor ("So you know my name is Tony and I am twelve and my mother who is named Alice except nobody calls her that, they all call her Al, like she was a guy only she isn't, is a stripper, only it's called exotic dancing, at a club called the Kitty Kat, except that everybody calls it the Zoo," reads the first half of the first sentence). Readers who like this style of writing can rest easy: Paulsen maintains that style all the way to the end. Ages 10-up.