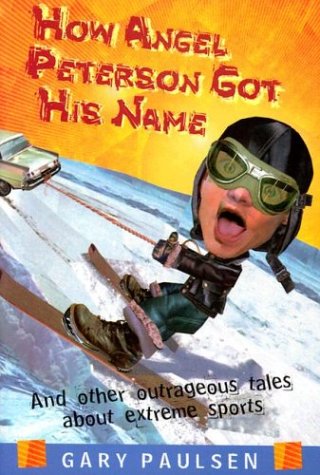 HOW ANGEL PETERSON GOT HIS NAME: And Other Outrageous Tales About Extreme Sports

Paulsen, who has written several volumes of memoirs, once again reaches back to his boyhood in northern Minnesota, this time to recount his and his pals' attempts to pull off stunts that live up to their billing as "outrageous" and "extreme," even by today's standards. An expansive foreword (which includes vivid details of the then-12-year-old author's almost catastrophic endeavor to ride over a dam in a covered wooden pickle barrel) and a don't-try-this-at-home admonitory note precede five swaggering tales of his contemporaries' derring-do. In the title story, a newsreel report about a new world record for speed on skis inspires a 13-year-old to try to break it—by attaching himself to a car on the flatlands. Elsewhere, a boy rigs up a hang-glider of sorts from an army-surplus target kite and a piece of hockey stick, and lands in a pig pen; impressed by the daredevil shows at county fairs, the gang imitates the stuntmen's maneuvers on their Schwinn bikes, etc. Paulsen laces his tales with appealing '50s details and broad asides about the boys' personalities, ingenuity and idiocy. Despite (or maybe because of) a heavy residual tinge of the fish story, this collection will likely hook adults as much as young readers. Ages 10-up.