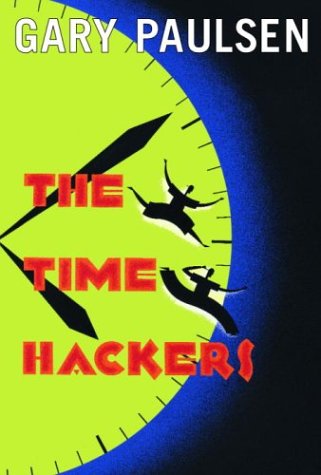 Paulsen's futuristic novel starts with a bang, as Dorso Clayman discovers a medical cadaver in his school locker ("It was an old cadaver. Runny"). Readers quickly learn that the discovery of a "hologram projector chip" has led to "time projection": anyone with a laptop could now "pull images from the past and project them anywhere." Yet this technology is supposedly governed by the "paradox of time"; individuals can view the past but cannot physically be transported back in time so as to be able to alter history. Dorso is puzzled by a string of computer-generated pranks (in addition to the cadaver, he's been visited by holograms of dead frogs, lab rats and rotting earthworms). But the 12-year-old is mystified when he finds himself face-to-face with Custer, Beethoven and then a woolly mammoth—which was most definitely a hologram. He and his friend Frank suspect that someone has found a way around the time paradox and that Dorso's laptop is connected to the perpetrator's scheme. As they're transported to various episodes in history (including the Battle of Gettysburg and the Crusades), the duo learns that time hackers are playing a game that might destroy the universe. Readers will be sucked into Paulsen's clever plotting, despite some silly, repetitive bits involving Dorso's younger sister's dress-up games with their cat, and Frank's obsession with conjuring up a naked Helen of Troy. This inventively twisted cyberspace caper may well lure kids more accustomed to surfing the Web than turning pages. Ages 10-up.