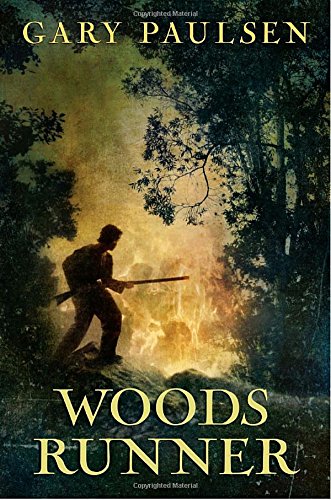 Set during the American Revolution, Paulsen's ( ) slim novel candidly and credibly exposes the underbelly of that war. Sam is a skilled hunter with an instinctive knowledge of the western Pennsylvania forest—a “woods runner.” When word of fighting between the British and the colonists reaches his family, the 13-year-old realizes that his life will change (“The loud outside world his parents had escaped by moving to the frontier had found them”). It is a brutal change: Sam returns from a hunting expedition to find houses in their settlement burned to the ground and the scalped bodies of neighbors. His harrowing quest to locate and rescue his parents—taken prisoner by the culprits, British soldiers aided by Iroquois—involves a nearly fatal run-in with a tomahawk-wielding native; a narrow escape from marauding Hessian mercenaries; and a fortuitous encounter with a Scottish tinker who's a spy for the patriots. Paulsen fortifies this illuminating and gripping story with interspersed historical sections that offer details about frontier life and the war (such as technology, alliances, and other period information), helping place Sam's struggles in context. Ages 12–up.