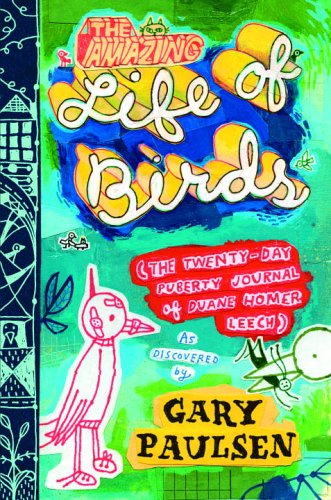 The Amazing Life of Birds: The Twenty-Day Puberty Journal of Duane Homer Leech

Paulsen's perceptive, funny look at the life of 12-year-old Duane is at once indisputably real and drolly exaggerated. The author gets the beleaguered boy's voice just right as Duane bares all in his journal, admitting, "Lately I've been thinking a lot about the female body. Not in a weird or sick way but not in an artistic or medical way either." When these images pop into his mind, he forces himself to instead envision " ," a tactic that "helps. Sometimes." As he identifies with a baby bird going through its life changes in a nest outside his window, Duane bemoans his zits ("my face looks like I tried to kiss a rotary mower"), cracking voice ("It sounded like somebody hit a bullfrog with a big hammer right in the middle of a croak") and persistent cowlick (which he likens to "that bushy little tail you see on the back of a warthog in "). At school, calamities abound: "a river of stupid" pours from his mouth when a new girl says hello to him (he later smacks her in the head with a volleyball in gym) and after creating a bald spot on his head while trying to cut his cowlick, he is suspected of having—and spreading—ringworm. Though readers aren't likely to encounter all of the humiliations Duane endures, they will identify strongly with his insecurities. After he clumsily causes bookcases and a fish tank to topple in the library, the boy sardonically says, "You gotta love my life." For all the reasons Duane doesn't, readers will. Ages 10-up.