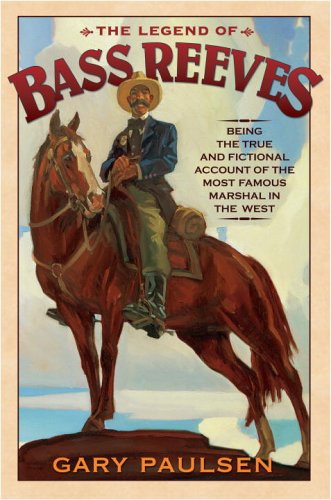 The Legend of Bass Reeves

In a foreword to this compelling fictionalized biography (appropriately subtitled, "Being the True and Fictional Account of the Most Valiant Marshal in the West"), Paulsen debunks the myths surrounding some of the Wild West's most celebrated figures. ("All in all, poor stock to consider when looking for role models from our frontier," he writes). As a dramatic alternative, he introduces Bass Reeves as "a man who truly qualified as legendary and heroic," a claim that Paulsen's tale easily supports. The young slave of a drunken rancher, Bass runs away after an altercation with his master (whom he calls "the mister")—the man was cheating in a poker game against Reeves in which the captive's freedom were the stakes. Paulsen's lilting prose weaves in colorful details (e.g., a "Jesus stick," two sharpened sticks fashioned into a cross, used to kill rabbits or hens) and historic events, such as the Alamo and the establishment of the Indian Territory. The chapters covering Bass's time among the Creek Indians moves almost too swiftly, but set the stage for the man's later work. (After the Emancipation Proclamation, Bass becomes a successful cattle rancher and, at 51, is appointed a deputy federal marshal, charged with "clean[ing] up" the Indian Territory.) Frequently confronting racial prejudice, Bass nonetheless never draws his gun first, killing only 14 outlaws. Effectively conveying Reeve's thoughts and emotions, the author shapes an articulate, well-deserved tribute to this unsung hero. Ages 10-up.