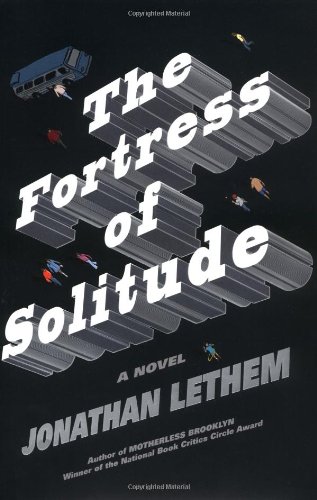 THE FORTRESS OF SOLITUDE

If there still remains any doubt, this novel confirms Lethem's status as the poet of Brooklyn and of motherless boys. Projected through the prism of race relations, black music and pop art, Lethem's stunning, disturbing and authoritatively observed narrative covers three decades of turbulent events on Dean Street, Brooklyn. When Abraham and Rachel Ebdus arrive there in the early 1970s, they are among the first whites to venture into a mainly black neighborhood that is just beginning to be called Boerum Hill. Abraham is a painter who abandons his craft to construct tiny, virtually indistinguishable movie frames in which nothing happens. Ex-hippie Rachel, a misguided liberal who will soon abandon her family, insists on sending their son, Dylan, to public school, where he stands out like a white flag. Desperately lonely, regularly attacked and abused by the black kids ("yoked," in the parlance), Dylan is saved by his unlikely friendship with his neighbor Mingus Rude, the son of a once-famous black singer, Barnett Rude Jr., who is now into cocaine and rage at the world. The story of Dylan and Mingus, both motherless boys, is one of loyalty and betrayal, and eventually different paths in life. Dylan will become a music journalist, and Mingus, for all his intelligence, kindness, verbal virtuosity and courage, will wind up behind bars. Meanwhile, the plot manages to encompass pop music from punk rock to rap, avant-garde art, graffiti, drug use, gentrification, the New York prison system—and to sing a vibrant, sometimes heartbreaking ballad of Brooklyn throughout. Lethem seems to have devoured the '70s, '80s and '90s—inhaled them whole—and he reproduces them faithfully on the page, in prose as supple as silk and as bright, explosive and illuminating as fireworks. Scary and funny and seriously surreal, the novel hurtles on a trajectory that feels inevitable. By the time Dylan begins to break out of the fortress of solitude that has been his life, readers have shared his pain and understood his dreams.