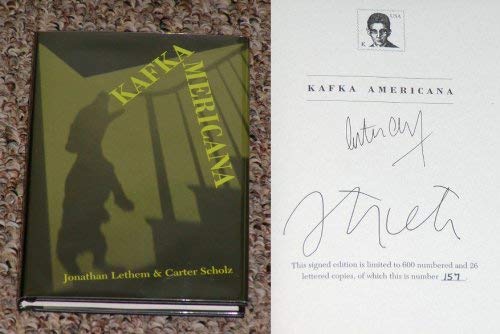 Kafka is not only an icon of disquiet, but a symbol of writerly dedication, the patron saint of tortured scribes everywhere. Thus, the very funny spoofs and ""alternate"" Kafkas presented in this short collection by Lethem and Scholz are inspired by affection. Perhaps the funniest of the group is Lethem (Motherless Brooklyn) and Scholz's collaboration, ""Receding Horizons,"" in which Kafka comes to America, changes his name to Jack Dawson and writes screenplays. After his death, one of the directors he worked for, Frank Capra, wants to make Dawson's ""The Judgment"" into a film. Capra hires Clifford Odets, who believes that the hero's name, Aussenhof, won't go over for an American audience. Aussenhof means outer court, which is what the English call a bailey, so the character is called ""George Bailey,"" and suddenly, a Kafka short story is transformed, with mad logic, into It's a Wonderful Life. In the ""Notebooks of Bob K.,"" Lethem turns Batman into a Kafka hero, and mutates various of Kafka's famous aphorisms into Batman-related sayings. Orson Welles makes an appearance in Lethem's ""K for Fake,"" which riffs on The Trial and features a man, like Joseph K in the novel, who gets a phone call informing him that charges have been prepared against him. This K being American, however, he immediately ascribes the call to a mixup with the credit card company, because he knows he isn't over his charge limit. The story follows the outlines of The Trial at a culturally dissonant distance. These stories are fluff, but extremely witty and intelligent fluff--making them a lot more solid than some more ostensibly serious writing. (Jan.) FYI: Kafka Americana will also be issued in a limited deluxe signed edition of 600 copies.
close
Details