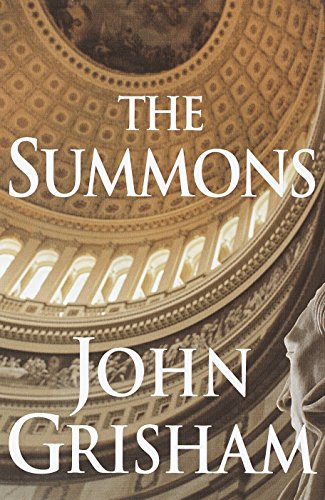 Last year's historical family drama and the Christmas satire demonstrated that Grisham is willing to take risks. But fans of his legal thrillers already knew that, with his last three, particularly , making Play-Doh of the rules of the genre. Sometimes Grisham's friskiness works, and sometimes it doesn't. There's much to admire in his newest thriller, particularly his colorful evocation of a Deep South legal setting, his first use of this milieu since his debut novel, , and some finely drawn characters. Even so, this isn't one of his most satisfying books, for while the narrative engages, it never catches fire. The setup is prime Grisham: Ray Atlee, a professor of law at the University of Virginia, is summoned home to Clanton, Miss., to the deathbed of his father, legendary judge Reuben V. Atlee; also summoned is Ray's younger brother, Forrest, a chronic drug abuser. Ray arrives home first, to find the judge dead and more than $3 million stored in boxes in a cabinet—cash not mentioned in the judge's will and whose source baffles Ray. Grisham does a wonderful job of digging into Ray's increasingly frazzled head as, stunned, the professor decides to keep the money a secret, even from Forrest, and to safeguard it until he figures out what to do. Greed, frayed nerves and fear plague Ray during the coming weeks, as he investigates, scrambling from one hideout to the next, becoming ever more aware that someone dangerous is following him and wants the money. Several scenarios—Ray's indulging his passion for flying small planes; his playing some of the cash at casinos to test it for counterfeiting; his dealings with screwed-up Forrest and his father's cronies, notably an ex-mistress and a wily old attorney—propel the story, and Ray, forward to the source of the money, a revelation that allows Grisham to take his usual swipes at big lawyerism but which will register for many as anticlimactic—though there's a final twist that as nifty and unexpected as anything Grisham has wrought. Grisham's writing is silky smooth here, his storytelling captivating; but the novel's lack of action—a stone thrown through a window is as violent as it gets—and the dissipation of all tension too far from the end make this, while a clever tale, one that's just too quiet. Grisham's fans might as well trim their nails while reading this, because they sure won't be biting them.