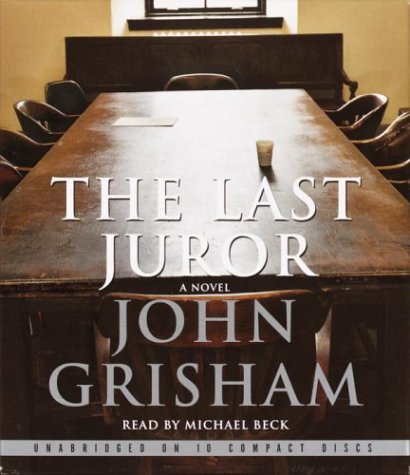 Longhaired 23-year-old college dropout Willie Traynor purchased a bankrupt Mississippi newspaper, , in the 1970s. With his progressive attitude and his British Spitfire car, he stands out in small town Clanton, where people "don't really trust you unless they trusted your grandfather." As editor and publisher, Willie's eyes are opened to many issues, including corrupt politics, the impact of segregation, the role of religion in a small town and the war in Vietnam. His scoop of a lifetime comes, however, with the brutal rape and murder of a young widow. Danny Padgitt, a member of a secluded family of drug runners and bootleggers notorious for buying the law, receives a life sentence for the crime, but he's released only nine years later. Shortly thereafter, jury members begin to die. Reader Beck has come far since his starring gang leader role in the 1979 film . Now, he's Grisham's primary reader and for good reason. His southern accent suits the story well, and his flawless first-person telling is utterly convincing. Particularly fun is the voice he lends Clanton's friend Harry Rex; one can almost hear the ever-present unlit cigar moving from side to side as he speaks.