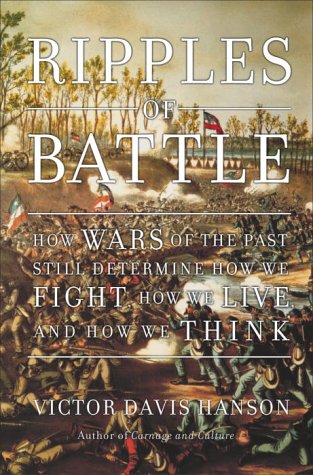 RIPPLES OF BATTLE: How Wars of the Past Still Determine How We Fight, How We Live, and How We Think

With this usefully idiosyncratic and provocative work, Hanson may succeed the late Stephen Ambrose as America's laureate of military history. But where Ambrose's tone is ultimately elegiac, reflecting on the deeds and character of a past "greatest generation," Hanson's is sharp edged and confrontational, linking past history and present policy. Even before the September 11 attacks brought him to national prominence as a commentator and analyst, Hanson's postulating of a "Western way of war" based on seeking decisive battle (not a given throughout the world) had gained wide attention. furthers this argument via three disparate battles, treated in reverse chronological order, taking the reader from more to less familiar territory to show its arc. On WWII Okinawa, the Japanese proved an inferior force could inflict significant damage by suicide tactics; U.S. forces responded by defining victory in the most extreme way possible: killing as many of the enemy as the could (rather than, say, seeking to gain a particular piece of ground). The Civil War's Shiloh set William T. Sherman on his path as a democratic war maker committed to both the defeat and the reconstruction of America's foes, while at the same time inaugurating the enduring Confederate myth of a "stolen victory" via Albert Sidney Johnston's death at the battle's climax. It also marked the beginning of Nathan Bedford Forrest's meteoric rise as symbol and avatar of the "unyielding South," which persisted long after 1865. The Battle of Delium, fought in 424 B.C. during the Peloponnesian War, was the first defeat Athens suffered that involved high casualties at the hands of Theban/Boeotian opponents, and it directly affected large numbers of thinkers, writers and statesmen—including Socrates, one of the survivors. The severity of the battle shaped the Western "decisive" approach that survives to the present. Hanson's conclusions show the threads of these battles in the garments of the war on terror. Some of his last points may seem forced to some readers, but he makes them with conviction and a genuine sense of wanting history to provide valuable lessons.