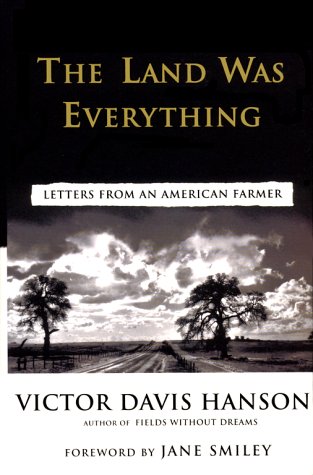 The Land Was Everything: Letters from an American Farmer

What does the imminent death of the family farm mean to the average American? A great deal, declares Hanson, who as both a farmer and a classics professor (California State University-Fresno) imbues this provocative, eloquent polemic with personal experience plus an unshakeable agrarian vision that harks back to Greece, Rome and the early American republic. Agribusiness, says Hanson, has obliterated the rural culture that once was the matrix of American society. The superabundance bestowed by corporate mega-farms, he adds, comes at a price: factory farms, propped up by mostly hidden government support and dependent on toxic pesticides and fertilizers, pollute the air, water and soil as they turn out bland, tasteless produce for a voracious, rootless and soulless consumerist society. Hanson (Fields Without Dreams) is totally unsentimental about small-scale independent farming; far from being tranquil, bucolic and simple, he reports, it is a brutal, dirty, maddening, messy, always difficult, sometimes deadly pursuit. Yet family farming, he insists, cultivates bedrock values--reliance on self and family, distrust of complexity and bureaucracy, skepticism of taxation, willingness to stand up to evil (whether the enemy be insects, weeds or monopolistic landowners)--values that are integral to a resilient, egalitarian democracy but that he believes are now in short supply. Hanson models these impassioned essays on Cr vecoeur's 1782 classic Letters from an American Farmer and sprinkles his barbed critique of contemporary American culture with allusions to Virgil, Pericles, Pindar, Euripides and Thucydides. Even if readers don't plan to go back to nature, his feisty, curmudgeonly, challenging, ruminative essays provide much food for thought. (Apr.)
close
Details