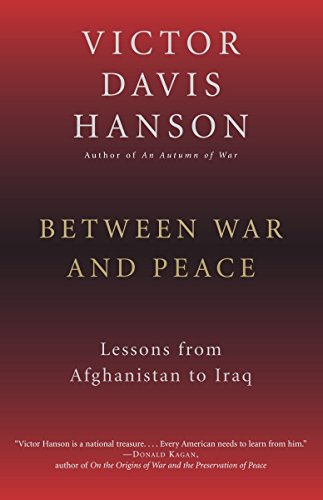 BETWEEN WAR AND PEACE: Lessons from Afghanistan and Iraq

Hanson ( ), who has been compared to John Keegan as a historian of war, doesn't display the objectivity of a scholar here. These 39 previously published essays (35 from ) assessing the U.S. war on terrorism mostly focus on broad-brush denunciations of Europeans, Arabs, the U.N. and Muslims, reserving praise for the U.S. and Israel as beacons of democracy. America's pre-emptive war in Iraq is applauded and, Hanson says, Syria should be next. Saudi Arabia should be seen more as an enemy than an ally and actively subverted. His targets are mostly caricatures—he portrays Europeans, for instance, as reactionaries in their anti-Americanism. Hanson, a scholar of the ancient Greek military, does not appeal to research or direct experience in the Arab world, but merely to what one can infer from mass media accounts. He professes faith that U.S. arms and good intentions will bring secular democracy to Iraq, and then beyond, but his dark portrayal of Arab culture gives little cause for optimism. The volume might have been more interesting if Hanson had confronted the difficult issue of just how less corrupt secular democracies might take root in the Middle East, including the problems of previous democratic experiments in the Arab world (in Lebanon, Algeria and Iraq itself before Saddam). What went wrong? Will the presence of U.S. soldiers insure that things go right this time? Hanson thinks so, but his reasons are not spelled out.