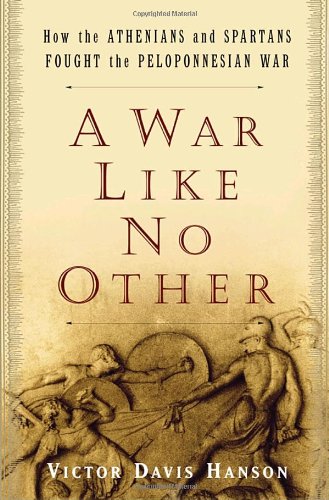 A War Like No Other: How the Athenians and Spartans Fought the Peloponnesian War

Hanson ( , etc.) presents an elegant, lucidly written analysis of the 27-year civil war, a "colossal absurdity," that ended in Athens's 5th-century B.C. loss to Sparta and the depletion of centuries of material and intellectual wealth. Hanson deftly chronicles these destructive decades, from the conflict's roots (e.g., the fundamental mutual suspicion between Athens and Sparta) to its legacy (the evolution of the nature of war to something "more deadly, amorphous, and concerned with the ends rather than the ethical means"). Hanson considers the war's economic aspects and the ruinous plague that struck Athens before delving into his discussion of warfare. He offers a tour de force analysis of hoplite (or infantry) combat, guerrilla tactics, siege operations and sea battles in the Aegean. Though landlocked Sparta ultimately brought down Athens's once-great naval fleet and replaced democracy with oligarchy by 404 B.C., Hanson complicates the received notion of a lost Hellenic Golden Age. Throughout this trenchant military and cultural history, he draws parallels between the Peloponnesian War and modern-day conflicts from WWII to the Cold War and Vietnam. Across the centuries, these are lessons worth remembering.