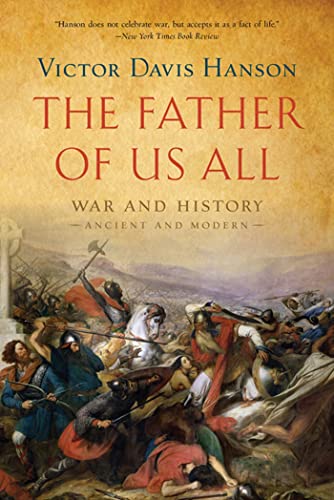 The Father of Us All: War and History, Ancient and Modern

Since 9/11, Davis, director of the Hoover Institution's group on military history and contemporary conflict, has emerged as a major commentator on war making and politics. This anthology brings together 13 of Hanson's essays and reviews, revised and re-edited. They have appeared over the past decade in periodicals from the to the Hanson's introductory generalization that war is a human enterprise that seems inseparable from the human condition structures such subjects as an eloquent answer to the question “Why Study War?” a defense of the historicity of the film , about the Persian Wars, in a masterpiece of envelope pushing, and a comprehensive and dazzling analysis of why America fights as she does. He explains why, though a lesser historian than Thucydides, Xenophon retains a “timeless attraction” and analyzes war and democracy in light of America's decreasing willingness to intervene in places like Rwanda or Darfur. The pieces are well written, sometimes elegantly so, and closely reasoned. They address familiar material from original and stimulating perspectives. Hanson's arguments may not convince everyone, but cannot be dismissed. His critics and admirers will be pleased to have these pieces available under one cover.